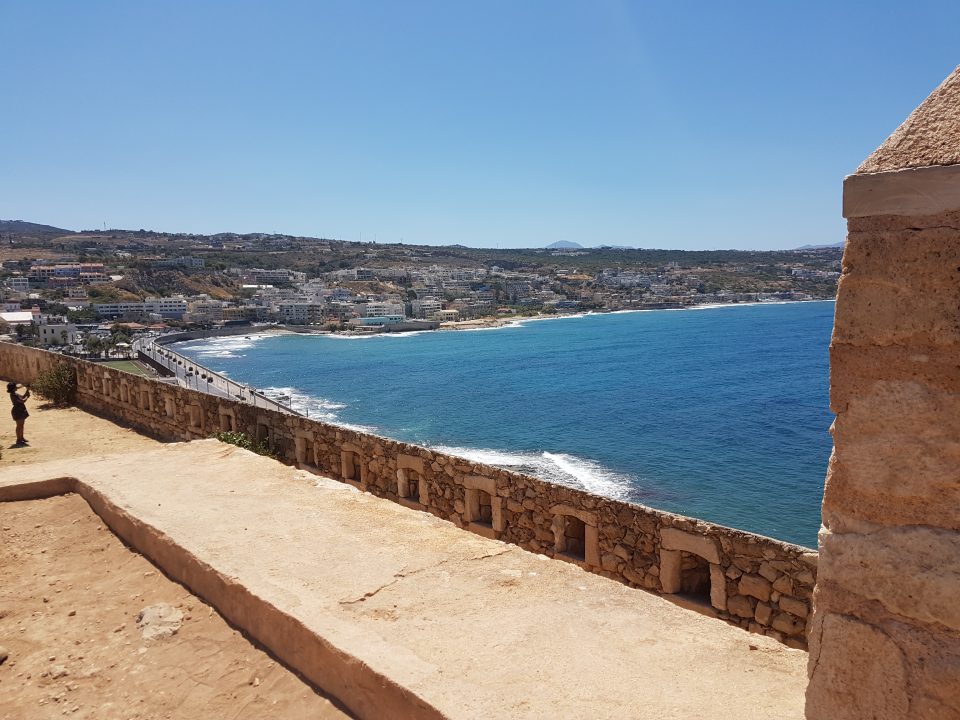 Rethymno is the smallest of Crete’s historic prefectures, but it sure packs a punch when it comes to cultural variety. The Old town is also one of the best-preserved historical localities in Crete. Remnants of people and history as the city changed hands over the centuries. The Venetians flourished and offered a romantic charm to the styling of the prefecture from the 13th century. Before the Ottomans arrived and took a claim in 1646. Subsequently, holding onto Rethymno and the majority of Crete until the late 19th century. Heroic acts would go down in history in the nearby Arkadi Monastery.

Time has passed here. The land has been fought for, won, lost, and won again. Two of Crete’s most famous monasteries are here. Along with many other cultural treasures. The small but grand Rimondi fountain is a work of art. The historical temple of the Lady of the Angels, built-in 1609 AD is the oldest building in the city. Add in the breathtaking scenery from vistas such as the Fortezza. With fabulous topography of mountainous countryside. Along with some of Crete’s finest beaches. Complete with curious caves and natural wonders, and you have yourself one of Crete’s most covetable prefectures. I couldn’t wait to wander about the city and discover the secrets within.

The Charms of Rethymno

I parked the car pretty near the old town. At ‘Parkering Rethymno’ on Sifi Vlastou Str., and headed to the Municipal Garden. And there I was! A jungle of life right in the heart of the city. Bursting with ancient bamboo groves that remind you that you’re standing in an exotic wonderland. I found myself making an appointment with the local wildlife and enjoying a quick coffee and ice cream. Close to the gardens, I wandered across the Church of Four Martyrs. Spectacular inside and out. I loved the pretty bell towers, but once inside, the light streaming in from the domed roof made the entire church glow with vivid color that brought the frescos to life.

It wasn’t long before I found myself standing at the entrance to the Old Town, Rethymno’s Porta Guora, otherwise known as the ‘Big Door’ loomed over me. A gate into the cities history. A welcome from a piece of the impressive architecture itself. The city of Rethymno is a treat for the intrepid city lover. With many narrow laneways to explore with shops galore. Crafting is prevalent among the markets and I found a plethora of handmade items including wooden utensils and tiny toys. Whittled perfectly into elegant little keepsakes. Everything here blends in beautifully and you get the feeling you’re exploring a quaint, historical Cretan town with a wide history and a bright future. From the elegant stonework to the cobbled brick pathways, this place was built to last and to be enjoyed. The architecture is quite something, and I found a place more beautiful than the last around every corner.

Stories can be spotted in the architecture from the houses and shops to the churches and monasteries. Most notably in the Venetian Loggia which sits right in the center of the Old Town. A masterpiece of 16th-century architecture featuring three equal semicircular arches on each of its square sides. It was once used as a recreation place for the local nobles and aristocrats. Now it is a carefully curated home for the Archaeological Museum. A plethora of old-world charm and unique Venetian influence can be captured under every square, balcony, and fountain. Every clock tower with its distinct bells and archways. Not to mention the enchanting Venetian harbor.

As expected, my heart skipped a beat as I wandered along the promenade of the Venetian harbor. Spotting the little lighthouse at the end of the dock. This one is of Egyptian design and is the second-largest remaining in Crete. I spotted an excellent viewing place under an archway across the harbor, so I walked along the promenade. Across from me was now a perfect view. The lighthouse elegantly centered in the middle of the frame within the arch. A delightful shimmering reflection on the water below. There is something about a lighthouse that makes a scene more enchanting, more romantic. The dark blue water lapped gently at the hulls of the pretty boats in the harbor and I thought to myself. This is the perfect place to sit and watch the world go by with a lover. Or a glass of wine and fine seafood. There are at least seven seafood restaurants with views to the Venetian harbor and the lighthouse.

Alternatively one can walk along the beach on the right of the harbor, a 3klm long pavement full of palm trees. I chose to sit in a café called Nuvell and catch my breath before I head to the unique sightseeing of Fortezza.

After a fresh orange juice and a cold sandwich, it was time to finally meet the great Fortezza. Seeing the whole city from a great vantage point. Incidentally, a wander up Palaiokastro hill to the remains of the Fortezza is only a few minutes walk from the harbor. I walked along Makedonias pedestrian street and there I was in the Main Gate of the Fortress, after 10minutes.

Its location provides fantastic views back over the bay and the bustling little province. With a grand backdrop of the mountains beyond. The purpose-built site is one of the biggest fortresses of the Venetian Era. Passing by the Artillery Depot, I walked straight to the Bastion of St Louka, so as to admire the southern panoramic view to the city.

Wandering around the walls of the old fortress with the map I got from the ticket bureau, it was fun to imagine myself in the past. Poking my head through the embrasures in the old walls to squint into the blue distance in the hope of spotting an enemy ship. It was comforting to watch the sea thrashing against the rocky beach below and dream.

There I was in front of the Residence of Counselors and then to the North Gate warehouse complex (where they used to store the food and water).

I was particularly enamored by the domed Ibrahim Han Mosque sitting on the plateau. Each stone carefully honed and placed faultlessly to erect the elegant spherical roof. Built-in 1646 originally as the Cathedral of St. Nicolas, it was converted into a mosque during Ottoman rule. It is one of the many markers of Rethymno’s battle-scarred past. Though it is no less an impressive part of the landscape and feels at home amongst the sunkissed skies.

There seemed to be so much to see here, so much to learn and soak in. Though incidentally, one of the best feelings, as I meandered through the streets of Rethymno, was simply the urge to explore. To wander through the narrow alleyways and see things anew. To take in the vibrant colors of buildings as they caught the afternoon sun. To breathe in the smell of the sea, tinged with the fresh scent of jasmine and summer flowers.

Leaving the historic hill of Palaikastro, I wandered along the small alleys in between boutique hotels and houses. It was just like a day in the Italian city of Siena. After some shopping, I stopped in a small bakery. A gem in the old town if you want tasty bakery treats at a fair price. Located at the quitter narrow lane, this place is worth the visit. It has a very traditional look and smell. You should try the chicken pie and the traditional Skaltsounia that I got on my way to the parking.

Rethymno was a place I found myself reluctant to leave…but I had to!

30 minutes outside Rethymno’s center is one of Crete’s oldest and most impressive monuments – The Arkadi Monastery. An outstanding example of 16th-century Baroque Renaissance-style architecture. Now listed as a UNESCO ‘European Monument of Freedom’. It’s not just a holy place, but a pinnacle of Greek history. The Arkadi region is named after this very important monument that dates back as far as the 5th century. Excavations collected from the site over time prove that the monastery was thriving in the Byzantine era. But by 1866 a storm was brewing.

Few people remained in the monastery and ever fewer were armed to fight as the Ottomans came to declare war. Its high walls acted as a fortress for the church and the residents within. Who fought a fierce battle against the Turkish soldiers during the Arkadi holocaust. By an act of rebellion and to ultimately hold onto the freedom of the people and the lands, the monks filled a room with gunpowder. They blew up the entire monastery, taking themselves and the sieging soldiers with it. They made history that night and won great support for the Cretan freedom movement. Outside the monastery is an ossuary featuring a glass cabinet containing the skulls of the explosion victims. A macabre, yet humbling memoir to the people who lost their lives that day.

Most of the monastery is still in great condition. I awed at the sheer height of the original bell tower with giant brass bells hanging from the columns. Their ropes dangling to the ground ready to sing cheerfully as they greet the day. You’re welcomed with the most elegant, symmetrical view of the bell tower as soon as you enter the grounds. Framed by the arched entryway to the inner courtyard. Inside, the arched brick cloisters seem to go on forever into the depths of darkness. Given the heroic past of the monastery, somehow I felt proud too, and strong and decisive. The weather was beautiful, and I enjoyed the shade of a magnificent olive tree reading up on the history of this fascinating place, before a drive among the traditional villages of Mylopotamos. My destination for the day was Perahori. The center of another historic place called Anogia!