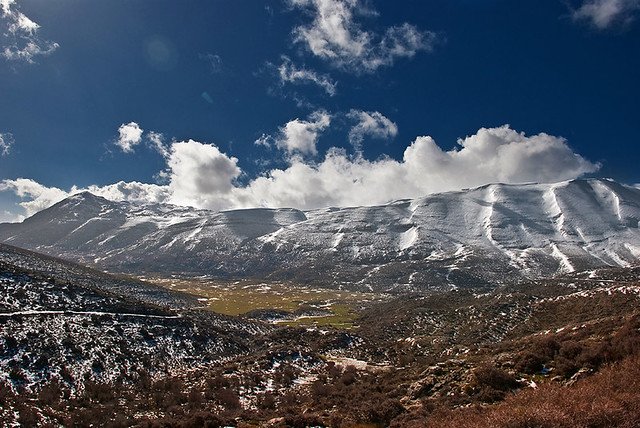 Crete is one of those sacred places on Earth that was blessed with the best of everything. Tranquil coastlines of endless blue, breathtaking landscapes of mountains and picturesque farmland that stretches on forever. Envious weather that negates traveling around the world for, and a plethora of traditional cuisines and eateries that’ll make you never want to leave.

There aren’t many places in the world where you can see snow-capped mountains in the distance as you sun yourself on the beach. Crete has that magical combination of truly perfect coastlines, juxtaposed against the majesty of mountainous terrain at its heart. The largest of which is the formidable Mount Ida, known locally as Psiloritis (translated to Tall Mountain in Greek). Standing at 2,456 m high overlooking the Rethymno region and classed as a UNESCO EUROPEAN GEOPARK due to its unique flora.

I was based in Heraklion, which was a mere 1.5 hr journey to the foothills of the majestic mountains, and as an avid hiker, it was an experience I didn’t want to miss. I rented a car from my hotel in Heraklion and hit the open road early in the early morning towards Anogeia village (1hr from Heraklion). The starting point for my journey.

There are a few paths that reach the summit of Psiloritis, the easiest one is from Nida Plateau (1412 m) close to Anogeia village. There is a little car park near the taverna (the only building, so you can’t miss it.) Psiloritis is made up of several peaks, of which Timios Stavros is the highest. The full return hike should take somewhere between 5-7 hours. Including a peaceful lunch break in the fresh salty air at the summit.

Starting at the base of the trail from Nida Plateau, I took one last look up at the rising mountain before me, ready to conquer her step by step. A short detour from the track was the Idaean Cave, so I decided to check it out before beginning my lengthy ascent. There are many caves systems amongst the Psiloritis, and I was planning to take a visit to the famed stalactites and stalagmites of Sfendoni Cave in nearby Zonania. The Idaean Cave is not large, but it has a connection to mythology in that it is believed to be where the God Zeus grew up, though it battles for the title with another – The Dictaean cave near the village of Psychro.

Back on route, the track was quiet, I probably saw only 6 other people on my way to the top. They passed by with an amiable wave each time I stopped to take photos and enjoy the delicate yellow flowers popping up among the rocks. There were still hints of snow up here in the shadows, clinging to the last breath of spring. Of course, I did see many more natural neighbors in the form of mountain goats that call the area home. They were much better at navigating the rocky paths than I was.

When you reach the summit, every step, every breath, and every drop of sweat is worth the effort at you scan the magnificent view. A panoramic dream view of all Heraklion opens up before you, with the Aegean Sea stretching to the north, the Libyan sea to the south, and Lefka Ori in the West. It’s a peaceful place to relax for a spell and think of how high you’ve climbed as the clouds slowly roll along.

After a hearty lunch of Breadsticks, cheeses, and a selection of meats I had chosen in the deli, along with a whole gallon of home-made iced tea, I decided to wander around the charming little chapel at the summit. The sign is marked by the name Timios Stavros (2.456m) and I was excited to ring the large dangling bell to celebrate my arrival.

With my stomach full and my pack empty, I was prepped for the return journey. I pulled the laces tights on my hiking boots and readied for the next challenge, tackling the rocky route back down.

As for any hike, make sure you’re prepared for the onslaught.

You’ll be walking a lot, so wear comfortable shoes, preferably hiking boots or solid walking shoes (no open toes, the road is littered with sharp stones, ouch). You’re in Greece, so hopefully, the weather is gloriously warm and bright, so be sure to take sunglasses and perhaps a light scarf to shield you from the rays, and of course, lots of sunscreen of a high factor as the route of this hike is very exposed. It can be pretty breezy at the top and 10 degrees less compared to ground level so I also advise a warm jacket, even in the summertime. Lastly, make sure to take enough water as there is no water on the mountain. Along with whatever tasty and wholesome Greek snacks you can pick up from the many delis and supermarkets.

At the base of Mt. Psiloritis is the traditional mountain town of Anogeia. After a long hike down the mountain, I wasted no time getting back into the heart of the village to seek a delicious and much-deserved dinner. I’d heard the word of its delectable grilled meats, as well as its fame for bearing some of the Cretan history’s most rebellious and revolutionary fighters. One thing is for sure, the landscape here is worth fighting for, and the mountains gleamed gold in the afternoon sun as I arrived. Anogeia is also known for its natural production of Cretan textiles, and I was lucky to see some of the locals in their loom workshops as I wandered the village, laboring over the most exquisite patterns and delicate cloth. My mother collects tea towels from around the world, and I was delighted to purchase one to add to her growing collection.

Almost by chance, in Perahori – the central part of the Anogeia area – I happened across a lovely cafe called ‘Michalos café’ in the main square. Where the locals recommended I try ‘Galaktoboureko,’ a Greek custard pie a little similar to creme brulee, and it did not disappoint! The custardy gooey dessert was absolutely delicious. It was the most wonderful way to wind down a long and fruitful day. With my coffee in hand and the mountain in my sights, I watched the sun sink gently and turn the little village into a golden city.

The next day called for a little more relaxation and I wanted to delve into the depths of the famously stunning Sfendoni Cave in Zonania. It is the largest cave system in Crete, with a collection of stalagmites and stalactites that will blow you away. These naturally formed pillars of calcified rock looked breathtakingly beautiful lit up in glowing color and glittering faintly with crystals that took centuries to form. It was quite cold inside, but I didn’t mind as I passed through each chamber, each one, in turn, more fascinating than the last. Starting with ‘sanctuary of the fairy,’ as legend believed the dazzling pillars were sprinkled with glitter by fairies of course. Through the ‘Chamber of harmonies,’ ‘the Chapel,’ ‘Palace,’ ‘Metropolis,’ ‘Panorama,’ and ultimately, ‘The chamber of the lost child.’ Aptly named after the preserved skeleton of a child was found inside after 900 years lost inside the cave.

Nearby is also the Zonania wax museum which I couldn’t resist dropping by. Inside are a plethora of historical Cretan figures deftly formed in wax. Some are equally amusing as they are terrifying. The lifelike models were sculpted to size by Mr Dionysis Potamianos and his wife, and it’s a very interesting, if not quite uncanny way to learn about the history of Crete across the centuries.

After an hour exploring, it was back to the car for the last journey back to my hotel in Heraklion, and a much-needed nap. 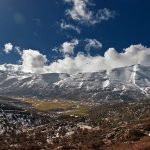