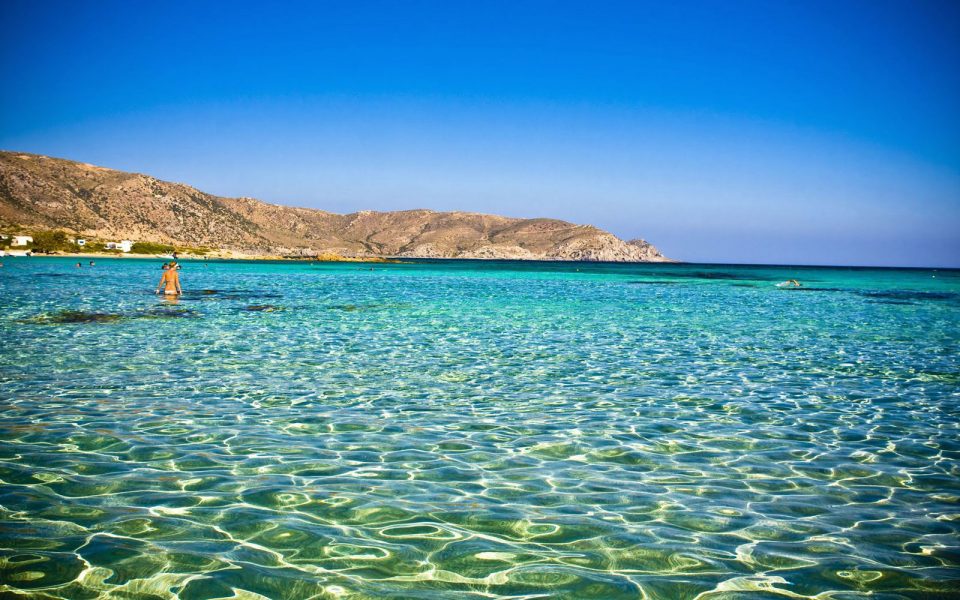 Sailing through the crystal clear waters, tropical fish spanning all colours of the rainbow darting in and out of my vision. It doesn’t get much better than this. In Crete, boat trips are an absolute must if you want to discover the best beaches, beautiful underwater worlds, and get away from it all to be a castaway on an island for a day.

Sail Away to Dia Island

What do you imagine when you hear the words ‘boat trip?’ I was picturing the scene in my mind. I could see the horizon line disappearing into the distance, the soft lap of waves behind me. I could smell the fresh salty air on the breeze, and the glorious summer sun kissing my skin with her warm and gentle rays.

I opened my eyes and no longer had to imagine. I was perched on the deck of a sailboat, gazing out at the endless ocean. The wind whipping at my hair and the waves dancing below. I had taken the plunge and set sail on a sailing cruise to Dia island – a tropical paradise just 10 miles from the Cretan north coast. It had been an early start to set sail for the day. I departed from my hotel in Heraklion and headed to the port. Worried as a bank of fluffy clouds populated the skies, but within the hour the sun had broken through and cast the perfect conditions to set sail. I could barely contain my excitement as the personal skipper, Yorgos Gonianakis, helped me board the yacht along with my little group.

It takes about an hour to sail to Dia island from Heraklion Venetian Port, which gave me copious time to sun myself on the deck and let the wind tease my hair into perfect sea-rinsed curls (one large dreadlock). I always carry a tangle teaser in case of these situations, but the salty moisture is so good for your hairstyle!

I enjoyed the surprise of a fresh iced coffee as we sailed along, the island slowly rising in the distance. According to the legends, a giant lizard once went on the rampage and tried to destroy the whole of Crete. This made the God Zeus pretty angry, and he punished the lizard by turning it into a giant island before it could reach the mainland. The lizard has been peacefully sleeping for centuries disguised as a paradise of sand and rocky ridges.

Dia island is uninhabited, which makes it the perfect spot for enjoying pristine beaches with not another soul to be seen. It’s also the ideal spot for snorkelling, as the shallow waters are so crystalline that you can see the fish and the amazing underwater flora as clear as day. All the better to avoid stepping on a group of sea urchins crowding by the water’s edge.

After a slight wobble that involved me donning my flippers and goggles and carefully lowering myself into the water, before misjudging how far I still had to go and ended with me plopping head-first into the water like a dead fish, I was ready for some snorkelling. It wasn’t the most graceful of entries, but once I was in the cool water, I felt so at ease just floating languidly in the soft waves.

I let the water rise up to my goggles in the shallows until I could see a half-world. A literal paradise of underwater dreaminess below and stretches of sublime sand and blue sky above. The coral and shells were so beautiful. I took time to admire a conch shell the size of my own head, before letting it fall back into the depths where it belonged.

Time flies when you’re having fun, and before long it was time to return to the boat for a refreshing portion of fresh fruit, gemista (staffed tomatoes) and hopefully chilled local wine. I even got to feel like the Queen of the sea at one point when the skipper let me sail the yacht! It was a good thing that no other boats or icebergs were floating in the Libyan sea. After my turn, I sank back onto the deck and enjoyed a relaxing sail back to Heraklion.

It was too late for me, I’d caught the sailing bug and there was no going back. I wasted no time searching for more boat trips to fit into my Cretan adventure. On the south side of Crete’s mountainous underbelly lies Chrissi Island. Another budget-friendly excursion ending in a beach of dreams. I’ve barely discovered the mysteries set deep into Crete’s southern coastlines, so I booked to go!

The journey inland to the southern coast is three hours, the sail lasts one hour and the time on the island lasts 4 hours. The excitement for the day had me rising super early. So much so that I caught the glorious sunrise from my balcony. Wolfing down a hearty breakfast of fresh fruit and honey with some exquisite ‘mizithra’ or ‘anthotiros’ – a delicious soft cheese that is a speciality in Crete.

When I arrived in Ierapetra, I almost wanted to stay awhile and wander the promenade decked with quaint vintage street lamps and that glorious mountainous backdrop that Crete is so famous for. But alas, islands were calling me, and I had to be ready to board at 10 am.

I was a seafaring lady once again, and I eyed the skies as the guide suggested, keeping them peeled for yellow-legged gulls. We were almost there when we got incredibly lucky to see a whole pod of dolphins dancing and leaping beside the boat. They were enjoying the kickback from the frothy slipstream as we chugged through the Libyan sea.

Basking on Chrissi island for approximately 4 hours until my ferry returns to Ierapetra, was like being a castaway for the day. I loved walking through the ancient cedar forests and listening to the calls of wildlife amongst the densely packed vegetation. I felt entirely at peace sitting on the golden sand, letting the waves wash over my legs and cool me down in the hot summer sun. In places like this, so serene and calm and beautiful, I wonder if I could just stay and be happy with a simple life. Living on coconuts and wearing a bikini every day. Usually, that’s when my stomach rumbles and I remember I can enjoy my meal on the boat. Heading back to Heraklion I thought how lucky I was to have visited an earthly tropical paradise. The southernmost natural park in Europe rightly called ‘the diamond of the Mediterranean’.

I was spending a few nights in Chania on this trip, which is one of my favourite places in Crete. I just love the picturesque, vibrant hub of activity that exists amongst an array of ancient architecture and gorgeous sea views. Like most places in Crete, Chania seems to exist simultaneously in the present and forever in the past. I had three days here, and it seemed like a great idea to have even more boat trip fun and see how many of the smaller Islands I could reach from the city.

When I arrived at Gramvousa and Balos lagoon beach in Crete, my only thought was wow! The place is like stepping into a postcard, so it’s no wonder Gramvousa and Balos constantly make it to the top of “best beaches around the world” articles. When I learned that you could only reach Gramvousa by boat, it seemed kismet that I would reach this place on my island hopping Cretan adventure, and I’m so glad I did.

This time we departed from Kissamos Port at 10am and set sail on the tour to visit the two glorious island delights. After one hour of sailing, we found ourselves to the first stop. Gramvousa! Gramvousa is curiously known as the island of pirates. This is obvious from the sight of the pirate flag as soon as you arrive! To my surprise, as it’s not often the case in Crete, the shallow waters were almost warm to the touch. It felt heavenly to just bask in the shallows and let the water lap over me whilst I admired the magnificent views. The flora and fauna here are endemic to Crete, such as the endangered monk seal and loggerhead sea turtle. So, it is deservedly protected as a sanctuary under the Natura 2000 programme. I stayed for a blissful two hours before boarding the ferry for the next stint to Balos lagoon.

After soaking up the joys of Balos’s impeccably blue waters and unwittingly entering a very intense game of beach volleyball, I was ready for adventure. I wanted to get a better view of the incredible coastline, so I trekked up the rocks to the little Venetian fort at the top of the viewpoint. (Thankfully I had packed my hiking sandals this time.)

The view from above is simply jawdropping. The ocean stretched out in an endless Aegean Blue that looked like ribbons as it flowed smoothly through the sandbanks and out into the world, the island of Gramvousa sitting perfectly in the middle. It likened only to my time in the Whitsundays in Australia, another one that makes those ‘best beaches’ lists. I knew immediately that it would be too good to miss the sunset here. The sun would set perfectly in the west and I’d have an uninterrupted view over the whole land.

Thankfully, a photographer is always ready for when an opportunity presents itself, and I had thought ahead to the prospect of spending the whole day here. Bringing enough food and an extra layer of clothing for sitting on the rocky outcrop. But unfortunately, I had to be back on the ferry by 4:30 p.m. I made a pact then and there to return by car the next day and spend some time at the viewpoint.

My plans paid off, and the next day I sat patiently waiting on the rocks. Watching the landscape slowly turn from a bright and crisp blue to a deepening golden hour. Before long the sky erupted into a million shades of red, pink, and gold. Engulfing the rocks in an orange glow and sending beams of light bouncing off the sea and sparkling in all directions. Pure magic.

All of this excitement took me back to the time I set sail to a mysterious island off the coast of Crete, which has since become one of my most revered memories. You can get to Spinalonga from the port at Agios Nikolas, and spend a whole day cruising along the Bay of Mirabello and exploring the fascinating island.

The island of Spinalonga has a curious history. Known locally as the ‘Isle of Tears,’ Spinalonga was the last active leper colony in all of Europe, before being fully abandoned in 1957. Read more about my enchanting discovery of Spinalonga and the beaches around Agios Nikolas in this article.

It was a calming drive back to Chania after the incredible show I had just seen, and I was certainly ready for a long and restful sleep. Of all the wonderful boat trips and beach frolics I had managed to enjoy in my time in Crete, the best was saved till last.