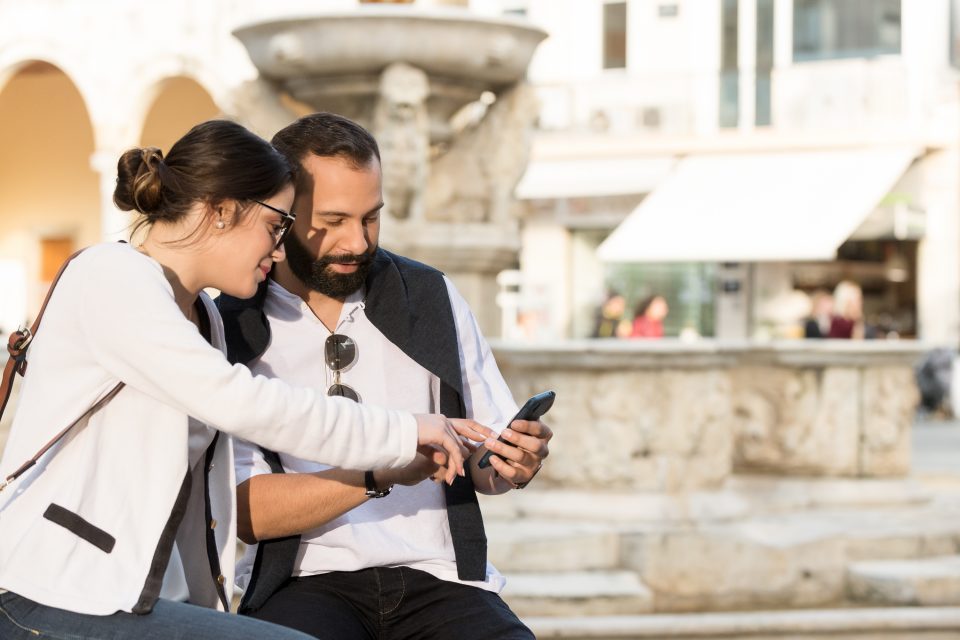 When your fellow travel writer friend demands – demands – that you take a two-day break and fly out to Crete’s largest city and capital, Heraklion, you know there’s a story there. But
why had she spoken so highly about the way of life, the people, and – importantly – the food and drink? I had to experience it for myself.

Landing at Heraklion airport on Saturday, I was pleasantly surprised by how close the hotel, and the city, were to the airport – around ten minutes. In the space of that time, my Uber driver had impressively unearthed where I was from, what I do for a living, what I was doing in Heraklion, and recommended me at least four places to eat, wander, and – importantly – drink. In fact, at his insistence when I told him I’d never been to Heraklion, or Crete, before – nor knew what a ‘kalitsounia’ was – we were soon en route to where I could find the answer.
On a street where I counted at least three bakeries, this was the one that my enthusiastic chaperone thought it criminal I was unaware of. Stamatakis Bakery, one of five Stamatakis family-run establishments in Heraklion since 2004. I’m unsure if my driver was an unofficial
or official spokesman but he regaled me about the company, its products, the family, and everything else, with the excitement of a kid at some bread-centric Disneyland. This particular bakery on Averof is all about the picturesque displays and welcomes that are warmer than freshly baked bread. It’s here I was introduced, finally, to kalitsounia, or Cretan pies – pastries made from a sweet cheese called mizithra that Stamatakis excels at making. I loved the version of carob-kalitsounia!
Also amid their loaves, rusks, cobs, cakes, and pastries was carob bread – a very rich tasting delicacy perfect for a quick snack, a quirky dessert, or a companion to a cup of tea. My friend who’d recommended the trip also recommended I should return with some for her, but it’s
safe to say that the extra I’d picked up didn’t last long. Boasting the freshest ingredients, pure Cretan olive oil, and bread baked on-site, I could see – and taste – why Cretans regard this place so highly.

A View With A Room

Next up, my excitable chauffeur delivered me to my accommodation for the weekend. Near Heraklion’s Archaeological Museum and other popular tourist spots, the Lato Boutique Hotel seemed like the perfect base of operations to explore, eat, drink, relax, and be close to the Heraklion action. Α rooftop restaurant overlooking the sea, a well-stocked bar, and a sleek, modern but cosy feel to its interiors.
Also included were friendly and conversational reception staff – you’ll find the warm Cretan hospitality to be omnipresent across the island.
Like the Herbs Garden Restaurant and its balcony views of the old harbor adjacent to the hotel, my room featured a beautiful panorama, a comfy bed, contemporary furnishings and amenities – and importantly – a veranda to take it all in.
The restaurant is the kind of place you want to book – popular with the locals because of its experimental and refreshing take on Cretan classics, popular with the tourists because of its appealing romance of Greek culture and cosmopolitan atmosphere, and an absolute must-go
for the foodies for all of the above… and a lot more. The attentive hospitality team were just another reason to love this place. They very helpfully navigated me to my table for one – I’m cool with it by now; I’ve got more legroom – introduced me to a menu of impressive fare,
and were sure to stop by to fill my water and wine glasses at regular intervals.
Of course, I already knew what I could and should try before I’d even looked at the menu. Everything from grilled octopus to risottos was on offer, but it was the velvet fish soup that would get me in the mood for an afternoon of wandering, city exploration, and relaxing.

Music, Dancing, and Too Much Wine

Now on the search for Cretan nightlife after a delightful and well-advertised meal, I found myself in a veritable hidden gem in the often-bustling labyrinth of the old town. Reeled in by
the inexcusable and unexplainable sound of secret jazz, I found myself stepping from a cluttered side street adjacent to the viridian Theotokopoulos Park and into somewhere
crossed between a magician’s basement and a wine cellar. This was Opus Wine Bar, or Opus Jazz Bar to those less interested in the grapes than the music fermenting in the air. Part inside, part outside, all atmosphere.

I was guided on my journey through this spectacular cavern by a kind server who seemed more cosmopolitan than eldritch, but completely at home in this fantastical, Instagrammable abode. I was led to a couch in the shadow of an olive tree and found myself illuminated by fairy lights growing from the treeline occupying Opus’ ceiling. This granted me the ability to
study the impressive selection of sharing dishes – and most importantly, wine – on the bar’s menu. If not for Herbs’s complete culinary satisfaction, I most likely would’ve been tucking into their inexpensive Greek cheese platter. Fortunately for the cheese, I chose to cut straight to the wine menu, a rustic red, the sweet, honeyed jazz in the air, and the immersive feeling
of being in some sort of ethereal Star Wars cantina. Definitely, one to check out.
For those fancying a non-jazz-tinged Cretan musical experience, look no further than Idiomelo – a traditional music house just beyond the Venetian Walls. Here you can feast your ears on Kritika, a hardy mix of folk, instrumental, and a capella ballads – and feet-stomping, shouting, dancing, and drinking like you’re at a family wedding. Often featuring more than six traditional musicians on stage at any one time, this musical shrine feels like a sort of Greek Woodstock of local and popular acts. There’s a lot to take in here – just make sure to book ahead so your seat doesn’t include a column view.
After a night of being fed, watered, chilled, and danced into chaos, this traveler was looking forward to being acquainted with Lato Boutique’s eagerly awaited bed. I was not to be disappointed and had dreams of enigmatic bars, auspicious bread, and cheese platters.

Day two was to be decidedly quieter. Today would be for unwinding, exploring, and of course – eating and drinking. A rejuvenating breakfast in the hotel’s Aroma restaurant and a quick regeneration in the wellness area – equipped with a steam bath and hydro massage – recovered me from my Saturday night foray into Cretan hospitality. Then I was departing the city in search of some peace and quiet.
Skalani Village – around twenty minutes from Heraklion by car – would be the ideal destination. Outside the bustling sticks of the city and nestled between the ancient Palace of Knossos and the striking Karteros Canyon, Skalani feels like a town that has witnessed and taken part in a seductive history.
I flirted with Knossos for an hour or so first, taking in the archaeological wonder of Europe’s would-be oldest city. Distinct from Heraklion for more reasons than not having a Zara or H&M within its walls, Knossos is a place where you can really feel the history beneath your feet. There’s a timelessness to the ancient ruins and amazingly preserved Neolithic architecture. If you’re looking for some peaceful reflection, contemplation, or a break from the cosmopolitan port-town, you should excavate yourself to Knossos.

Likewise, Skalani – which you can see from Knossos’ observation platform – is worth your Sunday exploration. The Boutari Winery is a particular slice of solitude, situated in the Scalarea Estate surrounding the village. Many travelers and tourists visit for its renowned
wine tasting but it’s the nearby Olive-Mint restaurant, or Elia & Diosmos, I have my sights set on for the day. Comprised of separate dining areas including a spacious main room, a luxury cellar for a more intimate eating experience, and a substantial courtyard for outdoor dining – it’s a haven for food goodness. The main room, featuring an open kitchen to watch Heraklion’s top chefs at work, was fairly busy when I arrived – even for a Sunday afternoon – showing exactly what locals and foodies think of Skalani’s favorite establishment. I was introduced to the quieter cellar room, with a clear view of both Boutari and Crete’s finest
bottles.

After much deliberation of the menu and wine list, I opted for an unrivaled ‘tsigariasto’ lamb and a smoked eggplant salad – both of which were just what I was needing after my chilled-out walk. Topped off with a glass of house red you don’t want to miss, this really was the mythical unwinding that I needed. I made sure to walk my meal off in Skalani before heading back to the city, taking in the views of where I’d been at Knossos and being allured inside a curious everything-sort-ofshop selling raki, olive oil, and miscellaneous Cretan goodies. I’d promised my friend to return with a bottle or two and some carob bread, but like the bread, it was unlikely that the bottles of raki would make the return trip.

After a busy couple of days, a walk through Heraklion and a quiet drink were in order. Take Five, a classic drinking den situated five minutes from the hotel, was happy to step up to the challenge. Obscured down a well-lit alley close to the major fashion brands and trappings of the city centre, it’s not trying to lure you in. It doesn’t need to – it’s occupied by those in the know, locals procuring an excellent coffee or cocktail, and the exceptionally welcoming hostess Vivi. It’s the oldest café-bar in Heraklion – something I’m informed in the warm reception by a receptive waiter – and it’s clear why it’s a classic. It’s a pantheon of Cretan culture, with the legendary hospitality of the island on full display beside its horde of local dishes, delicacies, and alcoholic delights. Wide menu, cocktails, beer, a host of small plates, and the advantage of being fairly devoid of the people you might find in a weekend bar crawl.

Leaving this cozy place after a couple of refreshing raki-based cocktails, I found myself caught in the pulling tide of Heraklion’s ancient beauty, taking a trip along past the towering Church of Agios Titos and towards the distant call of the water. Before long, I was disembarking from my walk with a contemplative sea view beside the Rocca a Mare Fortress. A stellar museum built into a refurbished 16th Century Venetian fortification, it’s a definite to-do in the daytime and allows for some cinematic views of the Gulf of Heraklion. Closed for the night but boasting an explorative exterior to be prowled by couples, old maritime wanderers, and the occasional night-time photographer, the fort-island and my Long Island Iced Tea made for a scenic and much-appreciated conclusion to my Cretan escape. This Heraklion must-see can also be spotted from my hotel, which is, conveniently, just across the road.

So, after a few days of unwinding, exploring, and feasting, it was time to return home, gift the remaining bottle of raki, and prepare for the next trip. Your hospitality, good food, and good drink will not be forgotten, Heraklion. I’m practically planning my next getaway already.